Presented at the Urological Research Forum at the annual American Urological Association in New Orleans, 1965, Dr. Robert Gibbons presented early experiments to treat non-invasive urothelial cancers of the bladder. The proposed hypothesis was that by circumferentially destroying the mucosa of the bladder, the risk of subsequent, recurrent non-invasive cancers could be eliminated. Therefore Gibbons set out to find an acceptable freezing material and device to deliver a treatment that could treat these non-invasive bladder cancers.


Using a specially designed transurethral cooling device, Gibbons was able to deliver coolant to the entire surface of the bladder – effectively destroying the urothelial layer. 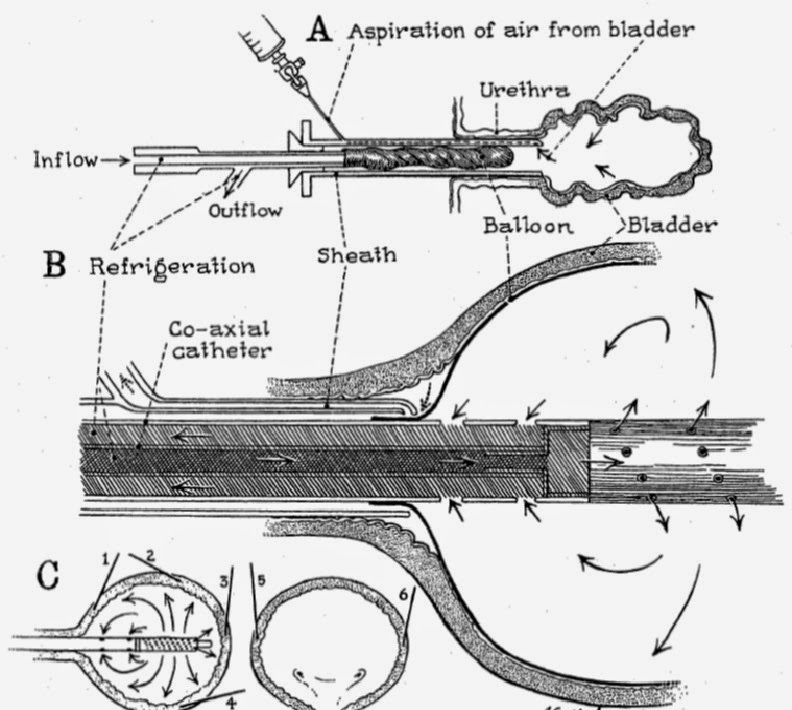 The experiments were carried out in 30 dogs, and anatomic and pathological evaluation was carried out of the bladders at varying time points following treatment. By carefully tuning the cooling apparatus, Gibbons was able to achieve greater than 75% mucosal slough in many of the experiments. Importantly, Gibbons was never able to achieve 100% mucosal destruction, nor could he create reproducible outcomes by standardizing the coolant and methods to cool the bladder. Anatomic examination demonstrated reduced bladder capacity, new onset hydronephrosis and abdominal adhesions in many animals. Pathological evaluation demonstrated involvement of the submucosa in most specimens and often noticed full-thickness necrosis of the bladder wall in a number of cases. Unfortunately, this corresponded to peritoneal infections and death in a number of the experiments.


While this experiment could be considered a failure, this was an outstanding attempt to treat non-invasive bladder cancers. In 1965, there was no BCG or other intravesical treatment for the management of non-invasive urothelial cancers. Thermal ablation, or "freezing" of cancers was en vogue and being attempted in gastric, esophageal, retinal, brain and kidney cancers.


Visit the Centennial Website or click here to see more about the first 100 years at the Brady.


HISTORICAL CONTRIBUTIONS highlight the greatest academic manuscripts from the Brady Urological Institute over the past 100 years.  As the Brady Urological Institute approaches its centennial, we will present a HISTORICAL CONTRIBUTION from each of the past 100 years.  In the most recent experience, the most highly cited article from each year is selected; older manuscripts were selected based on their perceived impact on the field.  We hope you enjoy!

Is Testosterone Replacement Therapy "Feeding the Fire" of Prostate Cancer?

While TRT has been used for decades the last decade has seen a dramatic increase in the use of TRT. The percentage of men in the Unites States over 40 years of age prescribed TRT increased from less than 1% in 2001 to nearly 3% in 2011 [Baillargeon et al., 2013]. The increase in TRT and lack of data from large, long term randomized controlled trials (RCT) has raised concern for unrecognized adverse health risks, including potential increases in cardiovascular disease and prostate cancer (PC).


There is large body of both historic and modern data supporting a role for androgens in PC pathogenesis and progression.

The data supporting the androgen hypothesis has led to the dogma that TRT in PC patients is like "feeding the fire." Historically, there is data supporting this concept. In 1982 Fowler et al. reported on 52 men with metastatic PC patients who recieved testosterone. 38% of men had elevations in prostatic acid phosphatase (a blood test used to monitor PC), 2 men had measurable metastatic progression, and ther were 4 deaths [Fowler et al., 1982]. Importantly, these patients had advanced disease, and many had prior androgen deprivation [Fowler et al., 1982]. Thus, it would not be appropriate to apply these observations to men with clinically localized disease who receive early primary treatment and PSA monitoring.


There is currently no reliable data indicating an increase in PC in men without PC undergoing TRT.

The majority of studies on TRT and PC are small, and to date, there have been no prospective studies on TRT with sufficient patient numbers to determine increased PC risk. By one estimate, 6,000 patients receiving 5 years of TRT would be needed to detect a 30% increase in PC incidence [Bhasin et al., 2003]. In a systematic review of 40 prospective studies, there was no study which demonstrated an association between TRT and PC risk in men without prior PC. In addition, a meta-analysis of 19 studies, there was no significant increase in PC or significant PSA increases necessitating prostate biopsy. [Calof et al., 2005].


TRT in patients with localized PC appears safe, based on limited data

Using Medicare data, Kaplan and colleagues reported on 149,354 men, including 1,181 men who received TRT after a diagnosis with PC. Overall, TRT was not associated with PC deaths [Kaplan et al., 2014]. Similarly, Pastuszak and colleagues reported on 103 men who after prostatectomy were treated with TRT. There was an overall increase serum PSA, but no evidence of increased cancer recurrence over 36 months [Pastuszak et al., 2013]. In a smaller study, Morgentaler et al. examined 13 patients with untreated PC, enrolled in an active surveillence program and receiving TRT. After a median follow-up of 2.5 years, 2 men had worse pathology on subsequent biopsy, but no cases of disease or PSA progression were seen [Morgentaler et al., 2011].

Overall, there remains no clear answer to the question "Does testosterone promote prostate cancer development in humans?" Thus, TRT in men with prostate cancer remains controversial. There is clear evidence that androgens can promote PC in animal models. It is clear that the influence of testosterone on PC disease progression is of paramount importance to both patients and providers as they weight the potential benefits of TRT. Currently, there is a growing amount of evidence that TRT is safe in well-selected men with clinically localized PC. However, these results are based on TRT in a small number of patients. Furthermore, the heterogeneity in PC progression and aggressiveness may give rise to heterogeneity in the responsiveness of tumors to TRT. Thus, until the results of future RCTs are available, TRT should only be offered to select patients who are carefully monitored and well-informed about the potential risks and benefits. 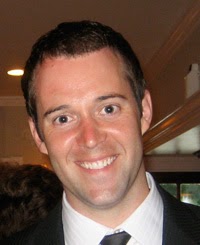 This blog was written by Jason E. Michaud M.D., Ph.D., urology resident at the Brady Urological Institute, currently in his laboratory research year.